The Orrell family appears to have come to Jackson County, Miss., from Alabama between 1882 and 1884. The Orrell family eventually settled in Florala, a village, north of the Latimer community in western Jackson County (north of Ocean Spgs & Biloxi). At this time, Florala had a post office, store, school, and turpentine still. C.C. Orrell may have operated what was known as the Double Still which gave its name to the present day (1998) road, north of Latimer.

Christopher C. Orrell died intestate on Aug 28, 1906. His remains were interred in the White Plains Cemetery at Harrison County, Miss. After C.C. Orrell's demise, a forced heirship suit, Cause No. 1661 - Mrs. Anna Orrell, et al v. Toler Orrell, was filed in March 1908 in the Jackson County, Miss. Chancery Court. A Court appointed commission composed of T.E. Ramsay, Wesley Cox, and Albert L. Orrell divided the C.C. Orrell Estate into 12 shares of equal value. Names and Numbers were drawn lottery style and 2,000 acres in T5S-R9W and 800 acres in T6S-R9W were awarded. The 12 parcels ranged in size from 200 to 280 acres. An additional 450 acres in the southern area of T3S-R7W, which is now in George County, was sold and the proceeds distributed to the heirs. 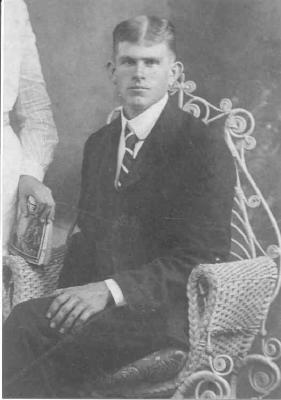 Charlie Caton
Charles Alexander Caton was born on 3 October 1875 at Craven County, North Carolina.1 He married Amanda Elizabeth Cayton, daughter of Ben D. Cayton and Margaret Scott, on 17 April 1904 "Mr. Charlie Caton, one of our most prominent young men, was married yesterday to Miss Amanda Caton of near Edwards, Beaufort County. She is one of the most beautiful and popular young ladies of her neighborhood. We wish them a long and happy voyage together on the sea of life."2 Charles Alexander Caton was living on 30 December 1904? At Beaufort County, North Carolina, as the Zorah News in the New Bern Weekly Journal reported that "Mr. and Mrs. Charlie Cayton have moved to Beaufort Co."3 He died on 10 August 1961 at Craven County, North Carolina, at age 85 due to a cerebral hemmorhage.4